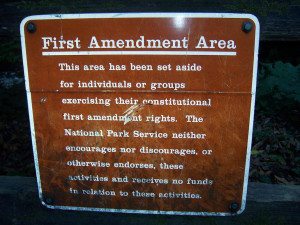 In City of Inglewood v Joseph Teixeira, the Court found that Teixeira’s use of City Council recordings in his personal critical commentary videos did not violate any kind of copyright laws. The Court’s decision to grant Teixeira’s motion to dismiss was not especially surprising. California state law creates a strong presumption supporting public access to public material.[1] Under this law California public entities, such as the City of Inglewood, cannot assert copyright on works they produce, including their City Council meeting videos.[2]

The City of Inglewood presented three arguments in opposition to this finding. First, they argued the Supremacy Clause, but the Court held that every authority that has addressed the issue has found that a State can choose whether or not it will hold and assert copyright over its works and those of its subdivisions, thus, the Supremacy Clause does not apply.[3] Second, registration of the videos as copyrighted material was deemed irrelevant because registration is not conclusive of a copyright ability and even if it were relevant, other cases that were cited by the City are not analogous to this case. These cases reference either books or software programs produced by City officials. Software programs specifically, are protected under California law, City Council recordings however, are not.[4] Finally, the City asserts thatCounty of Santa Clara v Superior Court, [5] a California court of appeals decision, is non-precedential. However, the district court is “compelled to follow [County of Santa Clara], absent convincing evidence that the California Supreme Court would rule otherwise.”[6] The City was unable to provide such evidence.

The above findings were sufficient for the Court to grant Teixeira’s Motion to Dismiss. However, should the Court’s decision be appealed, the Court chose to rule on the fair use doctrine, Teixeira’s second major argument, to a provide a full ruling.[7] The fair use doctrine is a common law doctrine that was codified into §107 of the Copyright Act. In reviewing Teixeira’s videos the Court concluded that the videos were protected by the fair use doctrine because Teixeira uses brief portions of larger works (often seconds or several minutes at most of several hour long proceedings) and then progresses to comment on and criticize the political activities of City Council and its members.[8] The Court then went on to look at each factor of the fair use doctrine and determined that Teixeira’s use of the videos fell squarely within the confines of said doctrine.

The case took a surprising turn however when the Court chose to award attorney fees to Teixeira. The Copyright Act provides that the prevailing party of a claim is warranted these fees if the opposing party’s claim was sufficiently weak. The result in this case was a judgment for $110,000 to be paid by the City of Inglewood, in addition to court costs and their own legal fees. In a nation where “loser pays” is incredibly rare, this decision came as a big surprise.

However, when the Court provided its explanation of the award, it seemed less surprising. The claim made by the City of Inglewood was deemed ‘objectively unreasonable’ and ‘frivolous.’ Teixeira won the case by a landslide and the Court hoped to deter future cases similar to this one. The Court even went as far as to comment that the City of Inglewood and their counsel should have taken more care and completed their due diligence before filing this unnecessary claim. While the City of Inglewood claims that the award will not act as a deterrent, only time will tell if other cities feel the same way.[9]