Our hearts go out to those who lost their lives last night in our hometown of Kalamazoo due to the senseless violence of what appears to be a random shooter. But as information has been released on the primary suspect’s identity, Jason Brian Dalton, we can only wonder if this tragedy could have been prevented by some quick action on the part of Uber, and we question whether that company could have taken extra steps to ensure the safety of its innocent passengers and bystanders. Based on initial reports, it is alleged that Mr. Dalton was an Uber driver who, in between alleged shootings, picked up passengers through the Uber app.

Approximately a half an hour before the first shooting was reported, the following post appeared on Facebook: 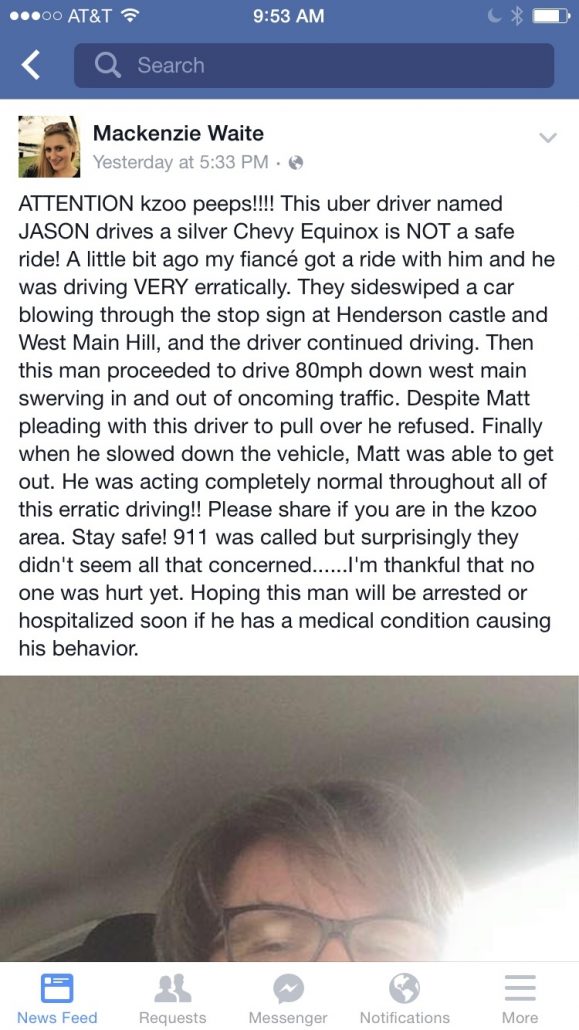 It is alleged that this post concerned Jason Brian Dalton, the alleged shooter. MLive reports that Ms. Waite called 911 and reported Mr. Dalton’s erratic behavior. And other third parties are reporting that Mr. Dalton may have dropped passengers off in between shootings.

Uber is certainly no stranger to passenger safety controversy, and we know from prior reporting that it has the ability to permanently deactivate the accounts of reckless drivers. But as the facts unfold, we can only wonder if Uber could have done more to detect this alleged driver’s erratic behavior, whether through software flags that identify a driver’s excessive rates of speed or through complaints from users such as Ms. Waite.

We hope that the police will act quickly to solve this crime and our thoughts are with the victims of this horrible tragedy.