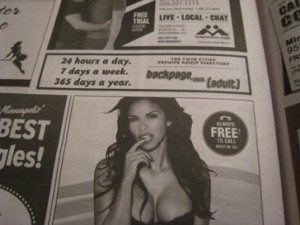 On September 3, 2015, in a rather unprecedented decision, a majority of the Washington Supreme Court held that Backpage.com, an online service provider, might not be guaranteed the protections provided for under the Communications Decency Act (“CDA”). JS v Village Voice Media Holdings involved minors that were featured in advertisements for sexual services on Backpage.com. The minors brought a claim against the operators of Backpage.com, Village Voice Media Holdings (“operators”), alleging negligence, outrage, sexual exploitation of children, vicarious liability, unjust enrichment, invasion of privacy, sexual assault and battery, and civil conspiracy.

The operators filed a motion to dismiss under Rule 12(b)(6) which was denied by the Superior Court. The operators sought discretionary review by the Court of Appeal, who certified the case to go to the Supreme Court for direct review. González, J. writing for the majority, held that if Backpage.com merely hosted the advertisements they would be protected by the CDA. However, if it could be proven that Backpage.com helped to develop the advertisements in any way, that protection would be void.[1] For more of a background on §230 of the CDA refer to post dated …. regarding Vision Security, LLC v Xcentric Ventures, LLC.

It is now commonly recognized that when a website operator passively displays user content that has been entirely created by third parties it is acting solely as a service provider with regards to that content.[2] The operator is not viewed as having published the content, nor are they in any way responsible for creating it. However, when content is created by the operator or the operator is “responsible, in whole or in part” for creating or developing the content then the operator will also be viewed as a content provider, similar to its users.[3]

In this case, the Court found that an operator would not be held to have developed the content simply by maintaining neutral policies prohibiting or limiting certain content.[4] However, if the operator’s terms of use were designed to induce sex-trafficking this would change the outcome. If the plaintiffs could prove that Backpage.com’s terms of use were aiding pimps in advertising their services, this would allow for the suit to move forward. Backpage.com would fit into an exception under the CDA because “a website helps to develop unlawful content, and thus falls within the exception to section 230, if it contributes materially to the alleged illegality of the conduct.”[5] The Court held that in this case, the plaintiffs had pleaded a case surviving the motion to dismiss. As a result, the Supreme Court affirmed the decision of the trial court, and remanded for further proceedings.[6]

Wiggins, J. filed a concurring opinion explaining that section 230(c) of the CDA does two things; first, it prevents treating an interactive service provider as a publisher or speaker of information that has been provided by a third party. Second, it places limitations on two distinct types of potential liability – the provider or user cannot be held liable for actions taken in good faith to restrict access to any objectionable material; and the provider or user cannot be held liable for actions taken that make it possible for a user to restrict access to material. Section 230(c)(1) does not however, as Backpage.com and the dissent claimed, result in absolute immunity by the operator.[7] Wiggins, J. wrote that the CDA is not designed to create a “lawless no-man’s land” on the Internet. The CDA prevents service providers from being liable when they chose to block and screen offensive material. It also encourages further development of the Internet by not permitting causes of action such as defamation which would have the service provider treated as the publisher or speaker of the objectionable material.[8]

Gordon McCloud, J. wrote the dissenting opinion in which he articulated that Backpage.com and its operators were entitled to immunity from the claim under section 230 of the CDA. As a result, McCloud, J. felt that the motion to dismiss should be granted.[9]