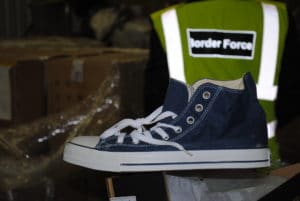 Following the signing of the first round of a new trade deal with China in mid-January 2020, the Federal government announced plans to begin cracking down on the sale of counterfeit and pirated merchandise on web-based retail platforms. See CNBC News report here.

The Department of Homeland Security (“DHS”) issued a 54-page report detailing the economic effects of counterfeiting. See report here. The report acknowledges that progress has been made in recent years and commends the many positive actions that have been taken by retailers and platforms. However, the report notes that not enough has been done. The problem is a “vital one,” according to the report, and “online availability of counterfeit and pirated goods continues to increase.” As such, the report states that “strong government action” is needed. The government has announced an action plan that is aimed at “… fundamentally realign[ing] incentive structures and thereby encourag[ing] the private sector to increase self-policing efforts and focus more innovation and expertise on this vital problem.” The report details the government’s plan which includes the following:

Much of the enforcement efforts will fall to DHS, the US Customs and Border Protection, and Immigration and Customs Enforcement.

Legally, the new enforcement regime is a potential game-changer since it seems that the government intends to take an aggressive stand concerning third party liability and contributory infringement. Despite many online sales platforms having “zero tolerance” policies for counterfeit goods, the problem has only gotten worse over the last few years. Various parts of the report suggest quite strongly that the solution is to punish third parties financially through litigation based on these legal theories of contributory infringement.

In general, an owner of a trademark has the exclusive right to place its trademark on the goods and products that it sells. Trademarks are valuable since they signal to the consumer the unique commercial source of the goods and, generally, indicate a level of expected quality. A trademark owner can sue for trademark infringement and obtain damages and injunctive relief.

A trademark owner can also sue for contributory trademark infringement against a third party (not the actual person or entity who infringed). The basic idea is one of enabling. Several of the more famous cases involved flea markets. The successful legal argument was that, but for the flea market offering a place to sell the counterfeit goods, there would have been no infringement. As such, it was argued that the flea market contributed to the infringement and should be held liable. As noted, those legal arguments were successful and have been expanded over the years to include online sales platforms.

When courts are confronted with a claim of contributory infringement, typically the courts focus is on three factual issues:

If you have questions about protecting your trademarks and other intellectual property, contact the trademark lawyers at Revision Legal at 231-714-0100.

Five Reasons to Register Your Self-Employed Brand as a Trademark Do Your Company’s Gift Cards Need to be ADA-Complaint?
7ads6x98y Scroll to top