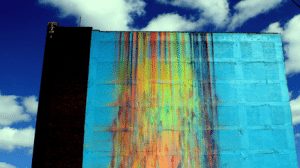 Detroit artist, is suing the Bloomfield-Hills based Princeton Enterprises because the developer wants to tear down a building in Detroit. While opposition to the destruction of buildings is not uncommon—particularly for older, historic buildings—Craig’s reason is quite different: she wants to preserve the 100-by-125-foot mural painted on the side of the building. Why? Because she painted it.

Click here for a Detroit News article on the story.

Craig painted the sprawling, colorful mural, aptly titled “The Illuminated Mural,” in 2009. It took her more than a year to complete, and she used 900 gallons of paint. In 2012, Craig registered her work for federal copyright protection.

In 2015, Princeton Enterprises bought the building with the hopes of tearing it down and redeveloping the area, or, keeping the building’s structure, but turning it into apartments, condos, or offices. Either way, Craig’s work would be materially destroyed. So Craig filed a federal lawsuit claiming that she owned the copyright to the mural, and therefore, she is the only person allowed to destroy it. In itself, this isn’t uncommon.

What makes Craig’s case so rare is the specific provision of the Copyright Act that she is using to make her argument. Craig is relying on the Visual Artists Rights Act (VARA) to make her claim. VARA was passed by the US Congress in 1990 in response to growing concerns that the United States did not respect the “moral rights” of authors in their work. While European countries have long seen copyright as both a protection of authors’ moral rights and a necessary way to incentivize artistic creation, the United States has historically focused only on the latter.

That changed to some extent in 1990. VARA is an extremely limited law. For instance, it only protects artists’ rights in paintings, drawings, prints, sculptures, and still photographic images. Further, there cannot be more than 200 copies of the work, and each copy must be signed and numbered by the author. See 17 U.S.C. § 106A.

Craig’s case is actually a pretty textbook application of VARA. Though the law is seldom used, when it is called upon, it is generally to protect large, public pieces of art like murals or statues. One of the more well-known VARA cases saw artist Kent Twitchell win over one million dollars when his 70-foot-tall mural in Los Angeles was painted over by the city.

But Craig does not seek money. Her complaint asks the court to grant her an injunction, which would bar Princeton Enterprises or any subsequent owner of the building from tearing it down. Whether or not Craig will be successful remains to be seen, as her case is still at the preliminary stages and there are still facts that need to be uncovered.

If you have any questions regarding VARA or the Copyright Act in general, or would like to speak to an expert copyright attorney about copyright registration or infringement, please give Revision Legal a call at 855-473-8474.