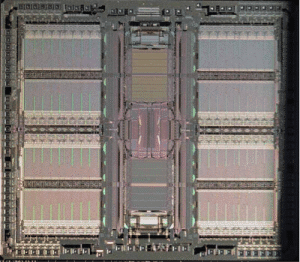 Over $30 million in damages, with an additional $6 million in interest and costs. That’s the price Clear Logic, Inc found itself paying after losing an infringement claim under the Semiconductor Chip Protection Act (“SCPA”). In 2005, the Ninth Circuit Court affirmed a case coming out of the Northern District of California regarding an infringement under the SCPA. Altera Corp filed suit against Clear Logic over Clear Logic’s business model, alleging the loss of millions of dollars in business. (Altera Corp v Clear Logic, Inc). Clear Logic used a bitstream generated by Altera’s programming to create a new and cheaper chip for the customer. Clear Logic’s chip therefore performed an identical function to Altera’s, but at a fraction of the cost. This type of chip was the only kind produced by Clear Logic, leading to Altera’s challenge of Clear Logic’s business model.

The design of a chip begins with a high level idea produced by the customer; what the customer wants the chip to be able to do. This idea then moves towards the placement of transistors on a chip over the course of multiple layers. This is the product of a “floor plan” of sorts. The floor plan is used to determine the specific placement of each transistor that’s etched onto the glass layers of the chip. It is the glass disk that is referred to as a “mask”. A chip will often require eight or more layers of these masks. The series of masks creates the “mask work”, the final product that is protected by the SCPA.

For more information on the specific terminology used and the contents of the Act itself, you can refer to “What Does it All Mean?” and “How Do You Protect Your Rights?” For a look at some of the history of the Act and its early application to case law, please review “A History of the SCPA.”

Clear Logic admitted to the similarities between their chips and those produced by Altera, but Clear Logic argued it had simply reverse-engineered Altera’s technology. The reverse engineering defense was designed to protect industry practices and encourage innovation. For the court to find that the similarities between the original chip by Altera and Clear Logic’s chip were the result of proper reverse engineering, Clear Logic’s final product could not be substantially similar to Altera’s. If Clear Logic could provide evidence of “substantial toil and investment” in creating their chip, instead of simple plagiarism, Clear Logic’s chip wouldn’t be held to infringe Altera’s.

Here the case turned on the jury instruction and whether or not the District Court had adequately discussed all the elements and factors that the jury could and should consider. The judge needed to (and did) explain to the jury that in terms of reverse engineering, copying of an original chip is acceptable if it is done for the purpose of teaching, evaluating, or analyzing the chip. Initially, the jury instruction didn’t accurately explain reverse engineering. However, the judge corrected this in a later section of their instructions.

In the end, the Ninth Circuit upheld the District Court’s decision and Clear Logic lost their case. Clear Logic’s business model was potentially too risky, especially when their only business was in creating chips that completed the same tasks as Altera’s at a fraction of the price. The court, forcing Clear Logic to discontinue their practice of using an Altera bitstream to create their own chips, also granted an injunction.

For more information regarding the Altera Corp case, or the SCPA and your rights or protections under the Act contact Revision Legal’s Copyright attorneys through the form on this page or call 855-473-8474.