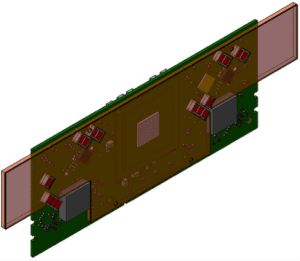 Not really Copyright law and not really Patent law, but somewhere in between: this is where the Semiconductor Chip Protection Act (“SCPA”) stands in US intellectual property law. In 1992 a case came before the Federal Circuit Court that resulted in a detailed explanation of the SCPA and a look at what Congress really intended.Brooktree Corp v Advanced Micro Devices, Inc was decided on October 9, 1992. The case looked at an infringement on Brooktree Corp’s semiconductor chip design by Advanced Micro Devices (“AMD”) and considered the reverse engineering defense raised by AMD. The Court of Appeals (Federal Circuit Court) wrote a lengthy opinion reviewing the history of the SCPA and in the end affirmed the District Court’s decision, upholding the finding of infringement.

In short, Brooktree had brought suit against AMD for infringement of their mask work registrations in regards to certain semiconductor chips used in color video displays. For a look at definitions of terms used within the SCPA, including “mask work” and a brief overview of what the Act covers, look at “What Does it All Mean?” and “How Do You Protect Your Rights.”

In Brooktree the Court discussed how the SCPA arose from concerns that the IP laws then in place weren’t sufficient to provide proper protection over work done on semiconductor chips. The Act was initially proposed to amend the Copyright Act, but there was speculation over whether or not copyright law could adequately protect against copying of patterns laid on the chips themselves – the Copyright Office had been refusing to register patterns on printed circuit boards and semiconductor chips because there was no separate artistic aspect required for copyright law to apply.

The patent law system also wasn’t appropriate on its own. While electronic circuitry and electronic components are within the scope of patent law, Congress wanted more expeditious protection against piracy of mask works to be available to the owners, whether or not the work met the requirements of being a patent.

So Congress created the SCPA, an Act adapted specifically for semiconductor mask works. It was designed to balance an appropriate level of protection with both industry needs and the public interest.

As discussed in “What Does it All Mean?” the SCPA grants certain exclusive rights to owners of the mask work, including the right “to reproduce the mask work by optical, electronic, or any other means,” and the right “to import or distribute a semiconductor chip product in which the mark work is embodied.” Protection is not given to an “idea, procedure, process, system, method of operation, concept, principle, or discovery, regardless of the form in which it is described, explained, illustrated or embodied” in the mask work.

The Court spent an extensive amount of time reviewing the jury instruction of the lower court, looking at whether or not the jury had been properly informed of what constituted an infringement and what a “substantial similarity” means within the purview of the Act. Because determining an infringement is a question of fact, not law, the jury instruction was critical to ensuring that the jury could come to an appropriate decision.

Infringement under the SCPA doesn’t require that all parts of the mask work be copied. Instead the jury or trier of fact looks to determine whether or not the duplicated portion of the chip is “qualitatively important” to the overall design. Congress had only wanted to protect against “piecemeal copying” and “copying a material portion of the chip.” There is no set percentage of copied material that will determine when a chip is “substantially similar,” this is for the trier of fact to decide.

In Brooktree there was a paper trail spanning several years. However, this trail only documented errors and failures. Once AMD had come to fully understand how the Brooktree chip worked, the paper trail stopped. And so, the Circuit Court held that there was sufficient evidence for the trier of fact (here, a jury) to find in favor of Brooktree, so they affirmed the lower court’s decision.

For more information regarding the Brooktree case or the SCPA and your rights or protections under the Act contact Revision Legal’s Copyright attorneys through the form on this page or call 855-473-8474.