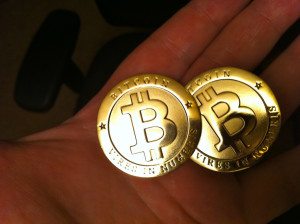 The Federal Trade Commission’s (FTC) mission is to protect the consuming public from deceptive or unfair business practices. The FTC accomplishes these goals using a variety of strategies, including keeping businesses accountable for false advertising, preventing anti-competition, and helping to enhance informed consumer choice, just to name a few. The FTC governs any trade channels within or associated with the United States. In the age of the Internet, these lines have blurred slightly, but the FTC continues its mission to protect the consuming public.

Bitcoin was developed in 2009 as a form of currency used, created, and held electronically in exchange for services, goods, or entertainment on the Internet. One major advantage to using Bitcoin is the ability to avoid banking institution fees, since users aren’t going through regular banks. Individual consumers sending and receiving bitcoins online is more like a person givinh physical cash to someone else.

The Bitcoin universe is controlled by “miners.” Miners act as an electronic, public ledger system for this electronic currency. Butterfly Labs sells products along with services to use its hardware in order to mine individually. The FTC claimed the company misrepresented the profitability of this product and process, and delayed shipments without immediately reimbursing clients.

The process of filing a complaint with the FTC regarding potential fraud, identity theft, or unfair business practices is pretty simple. The FTC simply needs to know your contact information, so they can get back to you, and the product and details that lead you to believe the business may be in violation of some FTC rule. The FTC investigated Butterfly Labs and its operators upon complaints from individuals who thought the mining machines they had purchased did not properly fulfill the advertised promise. Upon these complaints, the FTC filed a formal complaint in the Western District of Missouri and acted as the Plaintiff in the case, representing all affected consumers.

The FTC will investigate complains regarding any of the following general areas:

These various topics cover almost any aspect of financial trade and business operations that could affect the consuming public. While many of the topics are investigated upon complaints filed by consumers and other businesses, the FTC is constantly monitoring the general market for antitrust and large-scale deception.

If the FTC deems that a complaint holds merit, or if the FTC notices potential infractions, then it can first look at the issue in one of its own adjudication hearings. Upon the final decision of the hearing, the defendant has the option to agree to the final order given by the FTC or appeal to the court system. To file an appeal outside of the FTC, the defendant may file within any court of appeals that holds jurisdiction where the defendant lives or has a place of business. While the FTC has the power to first hold an adjudicatory hearing on its own, it also has the right to file within a district court if the offense deems it necessary. Because the FTC is a federal agency, it is always allowed to request a subpoena for information in any federal district court.

After a Commission order by the adjudicatory hearing is made, the defendant has 60 days to appeal the order. After that time, the decision is considered to be final, and any order (financial penalty or mandatory injunction) given must be made. If the FTC trial board determines that the penalties it can implement aren’t severe enough, the FTC may seek judicial enforcement of civil penalties or consumer redress. However, if the entire case was brought under a federal district court and the FTC’s hearing was bypassed, then the court ruling is final unless appealed in regular procedural fashion.

In the case of Butterfly Labs, the FTC brought suit in district court but settled outside of court. The marketing ploy by Butterfly Labs in regards to mining Bitcoins was considered misleading and deceptive to potential consumers. This act of deception does not set a precedent since it was settled outside of court, but it does hold some valuable weight in determining the deceptive nature of Bitcoins and the machines used to do the mining. Upon settlement, Butterfly Labs and some of its operators are prohibited from advertising that all of its instruments can be used to generate Bitcoins through mining since this is partial to only some of its products. Additionally, the settlement set up stricter parameters for Butterfly Labs to advertise the true availability of its products along with whether the exact product being sold is new or used.

If you need legal advice about FTC regulations and procedures, contact Revision Legal’s Corporate attorneys through the form on this page or call 855-473-8474.